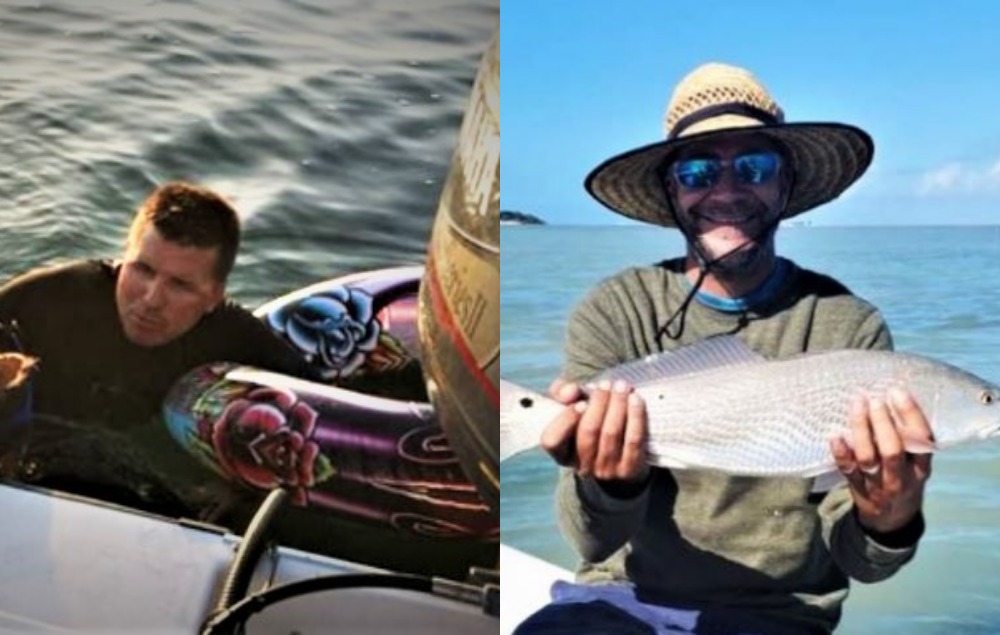 It was another sunny day in paradise and Eric McDonough, A.K.A. Doc Justice, was enjoying it fishing with his 6-year-old son.

The father and son duo had driven from their home in Homestead down to Islamorada, in the Florida Keys, where they were hoping to land the ever-elusive black grouper.

Doc is enthralled with fishing; it reminds him of his favorite childhood memories with his late father.

Even more gratifying for him is witnessing the pure joy his kids experience from fishing too.

But it’s not all about fun. He also teaches them know-how about nature and the importance of properly caring for it.

At around 3:15 p.m., on July 25, 2020, while on the fishing bridge over Channel 2, once the old overseas highway, Doc baited up a rod for his son, who then free-lined a live blue runner fish for bait.

The water’s current took the bait to the base of the nearest power pole.

Doc explains their fishing strategy as simple logic, i.e. little fish like structure and big fish eat little fish. The power pole is structure, and they were searching for dinner and a trophy using the live fish as bait.

But a blissful day fishing with his son came to an abrupt end when Florida Fish and Wildlife Conservation Commission (FWC) officer Christopher J. Mattson, rudely stole their fishing gear.

Officer Mattson was navigating his boat inside of the power poles, traveling at a speed a little shy of 25 mph, per GPS, and parallel to the designated fishing bridge.

We spoke with a professional boat captain, having decades of experience and intimate knowledge of the area.

The Captain was not only shocked about what had occurred that day but adamantly stated that it was common, local knowledge that you must navigate outside of the power poles here, because of the nearby fishing bridge.

“I had bent down to cut some bait for our other rod. With the reel open so the line could run out, my son sets down his rod. Then, suddenly, it took off like a rocket into the air,” Doc explained in a telephone interview about the incident.

“Jumping up, I watched the pole fly through the air and land in the water. My favorite fishing pole was now being pulled by the boat.”

Doc began walking to the end of the bridge while waving his arms to signal the boat operator.

The boat operator waved back acknowledging Doc, and at one point held up the live bait, pointing at it, and showing that he had possession of their fishing gear.

At the end of the bridge, Doc walked down the embankment, through the mangroves, towards the seawall, thinking the boat operator would allow him to retrieve his bait and gear.

The boat operator, later discovered to be officer Mattson, was dressed in plain clothes and operating an unmarked boat.

Then, without any apparent reason or provocation, Mattson, with one hand, retrieved the badge hanging from a necklace under his shirt, simultaneously lifting his shirt with the other hand to display his firearm, and aggressively placing his hand upon the gun.

“Instead of returning our bait so I could retrieve our gear, Mattson began scolding me as if I were a criminal while acting like he was giving me some kind of break,” Doc recalled.

At this point, Doc says he did not feel he was free to leave or end the encounter.

But what was Doc’s crime?

Was it lawfully fishing with his son from a designated fishing bridge, over navigable waters, as is his Constitutional right under the Public Trust Doctrine?

The only crime we can discern from watching the video is contempt-of-cop.

Humor aside, there appears to be an actual crime, other than theft. That is false imprisonment, FS. 787.02, which is a felony.

Video evidence supports that it was Mattson who was breaking the law — not Doc.

Aggressively displaying his badge and weapon, Mattson screams at Doc as he approaches the seawall.

“Sir, you could have killed me!”

“Why do you have so much line out? This is a navigable channel. You can’t have your fishing line that far out in the way. What happens if it would have cut me on the neck?”

Doc shrugs, apparently waiting for an opportunity to grab the other end of his line, and apparently fearful of moving or leaving.

“That’s not cool, dude,” Mattson yells. “You need to keep it closer to the bridge. Not 20 million feet out, please. That’s kind of ridiculous.”

Aside from the false representation of the facts, Mattson failed to provide any statutory or other legal authority, because there was none and Mattson knew it.

He was obviously working off of pure ego and emotion.

His supervisor even later admitted that he was angry, but we’ll save that for the next article

“I’m running with it on my boat,” Mattson openly admits in the video.

“Consider it a lesson learned. Thank You,” Mattson says.

Even though Mattson admitted to running with their gear on his boat, he made no effort to return any of it before driving his boat away from the scene.

And that, by law, is theft, FS. 812.014, and it allows for triple damages as well as costs and fees; several attorneys we have spoken with all agree.

No apology to Doc after scolding him. Mattson simply turns the steering wheel and boats away.

But not without first saying “Thank You.”

Thanks for what exactly?

Was Doc being thanked for allowing Mattson to steal a $400+ fishing pole while armed with a gun, traumatizing Doc’s son into thinking that it was his fault for losing their favorite pole, without Doc saying hardly a word because he was afraid Mattson might shoot him?

Obviously, this story does not end here.