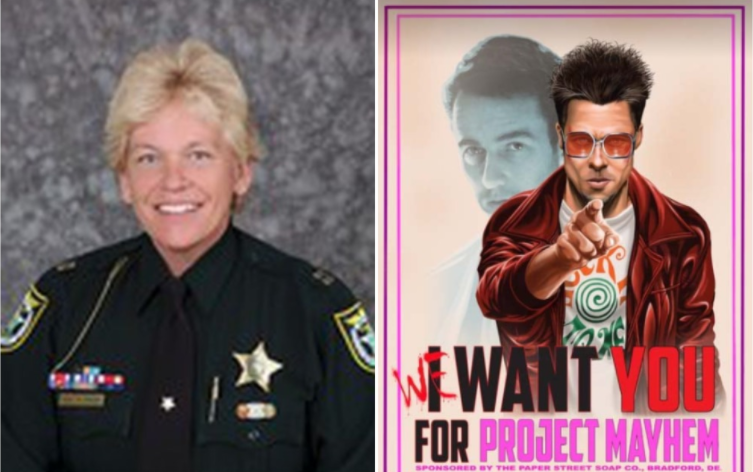 She was recorded ordering the Major Crime Unit to fabricate a stop by acting like grumpy, old white supremacists. Now she’s suing, claiming she never gave her permission to be recorded.

Monroe County, Florida Sheriff’s Captain Penny Phelps filed a July 16, 2021 lawsuit after her racially charged comments were accidentally recorded in a nearby room by a microphone used to record interviews captured her words.

She was later fired for her actions but is now suing for damages.

It happened November 20, 2017, after sergeant detective David Smith and detective David Fernandez neglected to turn off recording equipment inside the Criminal Investigations Office while detectives in the next room plotted how to confirm the identity of murder suspect Rory Hank Wilson.

Wilson was known to others on the streets as “Detroit.”

Captain Phelps admits in her complaint that she suggested deputy Malone should hang out in the area near the warehouse where Wilson stayed, in marked units, to conduct an illegal traffic stop on Wilson riding his bicycle.

The plan was to avoid tipping him off.

The objective was to avoid Wilson discovering he was the primary suspect in what has now become a tainted murder investigation dubbed the Tree House Murder Case, which several tabloid news outlets have covered since it occurred in 2017.

The Tree House Murder and Lack of Evidence Against Tucker

News coverage of the case has primarily covered sensationalized aspects of the couples’ marriage. That being, how a self-made multimillionaire reunited with a homeless man who was once her high school sweetheart.

But the re-connection made by defendant Tyrone Tucker and Cross-Fit Co-Founder Lauren Jenai on Facebook isn’t the only aspect of the case worth covering.

When looked at from both sides, in the case of Tyrone Tucker, at least, the state has built a questionable case against Tucker, which we covered late last year.

Firstly, no DNA linking Tucker to the crime scene exists.

The suspects include Rory Wilson, Franklin Tucker, and John Travis Johnson, although the only surviving victim says there were only two assailants.

Investigators found Wilson’s blood and blood from victims Matthew Bonnett and Paula Belmonte on the knife recovered from the scene.

They say Tucker and Wilson also attacked Belmonte, who survived the attack after Wilson allegedly cut her neck.

The official police version says Tucker and Wilson were wearing gloves and masks.

One had a knife, the other a billy club.

When Bonnett, who lived in a trailer on the property, came down the stairs, he surprised them.

They say that’s when Tyrone chased Bonnett down the stairs and fatally stabbed him.

And Tucker’s accomplices snitched him out, which led to his arrest.

The knife recovered contained DNA from both victims as well as Wilson’s. However, none from Tucker.

While in jail, prosecutors claimed Tucker bragged without remorse about his crime to another inmate, Naeem Jackson, who reported it to Sheriff Ramsey.

After prosecutors release what they knew about Jackson and his entire informant file, he admitted to Tucker’s defense attorneys, Cara Higgins; he’d worked at least 30 cases as a professional, confidential informant, several of them for the MCSO.

Jackson testified against Tucker in the Tree House Murder case in exchange for his release from jail.

Another questionable aspect of the state’s case includes the testimony from the surviving victim, who says she remembers the attack. And although she says both men wore masks, she also says Tucker was not involved in the attack.

Witness Todd O’Quinn, also known as “Hollywood,” says he saw a white suspect take off his mask as he was running away. He has since maintained in numerous statements that he is 100% sure it wasn’t Tucker.

He described the assailant as about 5’8”, weighing 145-155 pounds with brown, curly hair and younger .

Plus, O’Quinn knew Tucker, and was sure it was not him.

“They turned Tyrone into this next assailant when there were only two people there. No, it’s not Tyrone. It wasn’t . . . didn’t match high height and frame. I saw a half of his body from the back. And it’s not him. Widthwise, height-wise. . . when Matthew went tumbling down the stairs, I heard the other person say he’s dead, and it wasn’t him. I know his voice. It was not his voice,” she told True Homestead on video.

With so much evidence in favor of Tucker’s innocence, the question now becomes how the state plans to obtain a conviction against him.

It wasn’t what she told her subordinates to do or how to do it that got her fired.

It was Project Mayhem.

Tucker maintained he was being framed by Captain Phelps as he remained in jail for two years.

“In jail, I was doing a lot of reading. I was reading the book Fight Club. It talks about how if you’re fighting corruption, how do you do it? You tackle it from all angles,” he told True Homestead in a recent interview.

After reading the book, Tucker engaged in recorded phone calls with his soon-to-be wife, Lauren Jenai.

Together, they plotted a plan using the aspect of the book, Project Mayhem. The main character Tyler uses Project Mayhem to spread his ideas of anti-consumerism to bolster Tucker’s defense.

According to Phelps, at least, part of their plan also included having her removed from the investigation by creating the false impression that she and detective Pittman were engaged in misconduct.

Sometime around September 15, 2019, Tucker started acting on his preconceived plan, Project Mayhem, by outlining a slew of criminal charges he wanted to be filed against captain Phelps, including evidence tampering, manufacturing of evidence, and destruction of evidence.

Tucker hand wrote an internal affairs complaint and sent it to the MCSO from his jail cell outlining his allegations.

Throughout her lawsuit, Phelps makes claims about injustices against herself, in part due to her sexual orientation.

The Presumption of Innocence

However, she never mentions any aspect of Tucker’s rights and his status of innocent until proven guilty.

Instead, she claims Tucker’s defense attorney Cara Higgins is in on Project Mayem, and news covering the arguments she made on her clients’ behalf has contributed to the discrimination against her.

After Higgins called her words captured during the interview room audio recording “despicable” during a December 12, 2019 radio interview, Sheriff Ramsey recommended her termination.

On December 14, 2019, four MCSO employees dressed in tactical vests served notice on Phelps informing her of her termination, taking all of her uniforms and stuffing them in a bag.

“[MCSO} Sheriff’s Office does not tolerate these types of comments. I just cannot defend this,” Ramsey later told the press in an interview.

Phelps, however, argues Sheriff Ramsey should have defended her actions. She says terminating her shows how his mind was already made up, and she claims she never received the benefit of due process.

Due to the loss of employment negatively impacting her property interests that depended on her work, she’s requesting monetary damages from the defendants.

Meanwhile, a gag order preventing him from talking about the case to news media has been placed on Tucker, as he battles more severe allegations pertaining to his freedom.

Despite the lack of evidence against Tyrone Tucker, former Captain Penny Phelps did not raise that point.

Nor does she seem to understand that her comments were bad enough when uttered by anyone.

That she was a high-ranking law enforcement official who would say them in light of the ideal that each suspect is to remain innocent until proven guilty might be the most significant statement she has made so far.