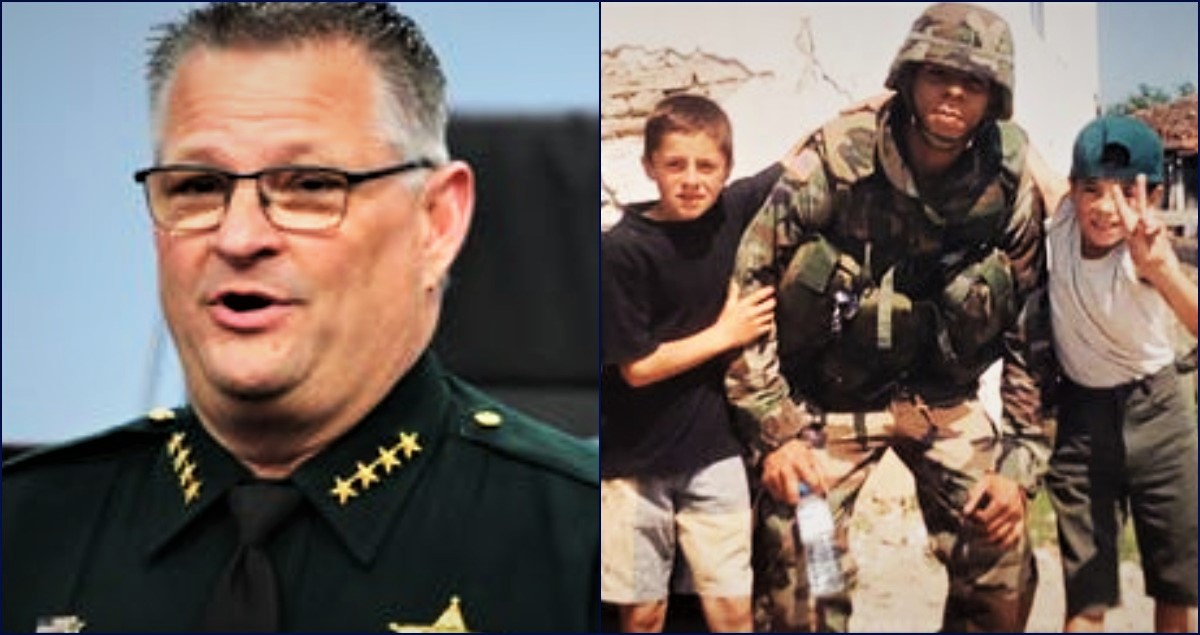 So, he took it a step further the night of June 14 by showing up, unannounced, to the home where Kathleen Edwards was staying to conduct what he says was a “welfare check.”

The two had never met until that very moment.

Then, without her permission, Sheriff Ivey, flanked by six deputies, walked out of the darkness and grabbed Edwards, hugging her, after Edwards had began hyperventilating upon realizing several deputies and the sheriff arrived and were calling her to come outside.

Then, one of the deputies recorded the uncomfortable moment as if it were a public relations photo op, which seemingly adds even more fuel to the fire.

Just seconds before, Alton Edmond received a text from Kathleen that simply read “911.”

He could hear her hyperventilating and sobbing.

Frightened, she explained to Edmond how several male Brevard County Sheriff deputies had arrived at her home unexpectedly.

“I am shocked and sorely disappointed with the way Sheriff Ivey handled this situation,” Edmond, the sheriff’s current opponent for the 2020 election told USA Today.

Edmond continued, saying the public deserves an explanation for why the sheriff and several deputies decided to approach the grieving mother of two this way.

“He showed a clear and utter disregard for and insensitivity toward Mrs. Edwards’ compromised state at the sight of the deputies’ unexpected presence. She had just tucked her young children into bed when they arrived.”

“For him to send an estimated six units to her home and order them to remain there until he arrived on the scene for what seemed to be a photo-op was a despicable display of hollow empathy toward this young widow. Hasn’t she been through enough over the last 18 months since her husband’s death?” Edmond pointed out,

On top of 18-months of hiding from the public what happened to a U.S. citizen and military veteran behind jail walls before his untimely death, neither Sheriff Ivey, nor the department, are explaining why they were even there or why they even thought it would be a good idea in the first place.

“Out of respect for Mrs. Edwards’ privacy, the Sheriff’s Office will not be commenting on the nature or purpose of tonight’s service call at her residence,” spokesman or the Brevard Sheriff’s Office Tod Goodyear told USA Today.

Goodyear did, however, confirm deputies video recorded this debacle of a staged photo op.

But he didn’t explain why it was OK for the sheriff to bring his camera to document their impromptu visit to a grieving widow’s home — and not OK for her to see the footage from the jail documenting her husband’s death.

As pressure from the public has ramped up to release the video showing Edwards’ death in the wake of George Floyd’s killing, Sheriff Ivey has been steadfastly doing everything he can to make the public forget, which indicates to many he’s less worried about security inside of the jail and more worried about hiding something.

He has yet to do what the public sees as the right thing for not just his department, but any department.

He claims that’s because state statute exempts him from releasing it — for security purposes.

“I’m not going to put the men and women that work in that jail, at risk,” he explained citing the security of the facility and workers inside.

“I’m not going to put the security of that jail at risk when a very thorough investigation was done and on top of that, the state attorney himself has seen that video and used it as part of his decision in saying there was no wrongdoing on behalf of the deputies.”

It’s an interesting response, mostly because, as watchdog group Brevard Corruption Watch pointed out on Facebook this weekend, Sheriff Ivey, the self-described “most politically incorrect sheriff in the country,” loves nothing more than hamming it up on camera for various television shows, including COPS, Live PD and Banged Up: Teens Behind Bars.

And the inside of the Brevard County Jail Complex has already been broadcast on public television multiple times under his tenure, which began in 2011, during those reality television episodes.

Sheriff Ivey also hosts a couple more amateur-level television broadcasts on his campaign’s website, which have also publicly revealed — on more than one occasion — various details of what the inside of Brevard County Jail Complex looks like over the internet.

Another low-budget television show dubbed Wheel of Fugutive, where Sheriff Ivey spins a wheel with a fugitive’s picture on it in hopes they’ll turn themselves in after seeing themselves on social media broadcasts via the department’s Facebook page.

Another amateur reality type show is called Riding Shotgun, where a camera rides along with Ivey’s subordinates detailing what Brevard sheriff employees do during shifts out on the beat is broadcast on various places on the internet including YouTube.

This weekend, Sheriff Ivey pitched, or insinuated, the idea that there was nothing for the public to be concerned about because he was requesting the FDLE to investigate his department’s investigation.

There’s just one problem with that that has observers of the case drawing vastly different conclusions about what happened to Edwards in the Brevard County Jail despite Ivey claiming transparency.

Sheriff Ivey was employed by the FDLE until 2011 when he retired in the midst of an internal affairs investigation and ran for sheriff instead.

Then, he was referred to as agent Ivey.

The basis of the FDLE’s disciplinary investigation into Ivey stemmed from an incident in which he was overheard threatening his son’s ex fiance who worked as a probation officer up until their engagement soured.

In that instance, Ivey failed to keep appropriate records detailing the interaction.

In fact, no records documenting the incident were kept at all.

Edwards wife insinuates the cover up may go as deep as the Brevard County Medical Examiner who curiously documented Edwards’ cause of death as ‘excited delirium.’

Immediately after releasing information about Edwards’ passing, the Brevard County Sheriff’s Office initially claimed he was “huffing” something or inhaling chemicals similar to computer cleaning spray, which is also curious to those following details of Edwards’ death.

But that turned out to be a lie.

Records show the Brevard medical examiner found no evidence of drug use during their autopsy.

Further, after Kathleen Edwards demanded an outside autopsy, the medical examiner who performed the second one discovered Edwards was missing all of his organs.

That detail by itself left locals drawing conclusions about a cover up.

And then came what many expected.

Dr. Nelson determined Edwards’ death was likely a homicide and not an accidental death caused by ‘excited delirium’ as the Brevard medical examiner initially ruled it.

Meanwhile, Kathleen Edwards recalls how the whole ordeal has traumatized her.

“They even still have my husband’s organs, his brain, and kidneys, and said they were going to send them to us…they said they would wait on our own autopsy but didn’t,” Kathleen Edwards told Florida Today during an interview.

It all began when Edwards, a combat veteran diagnosed with PTSD, began having a PTSD-induced psychotic episode in front of Walmart in West Melbourne.

Police say he was involved in a dispute with a charity worker before officers were called onto the scene.

During his arrest West Melbourne police captured his arrest on body cams. Meanwhile, after his arrest, an in-car camera shows Edwards’ ride inside a Melbourne patrol car to the Brevard County Jail Complex.

Those videos were accessible immediately after Edwards death.

A year and a half later, we still haven’t seen what happened to Gregory Edwards.

In two months, however, that could change if Alton Edmond defeats Ivey in the political race for Brevard County Sheriff.

By all means, he appears to be a better fit for members of the Brevard County community.

Watch an interview with Kathleen Edwards, as well as Sheriff Ivey’s recent press conference below.

One thought on “Fl. Sheriff Won’t Release Video Showing Jailers Killing Army War Veteran. But he will Revictimize his Widow.”