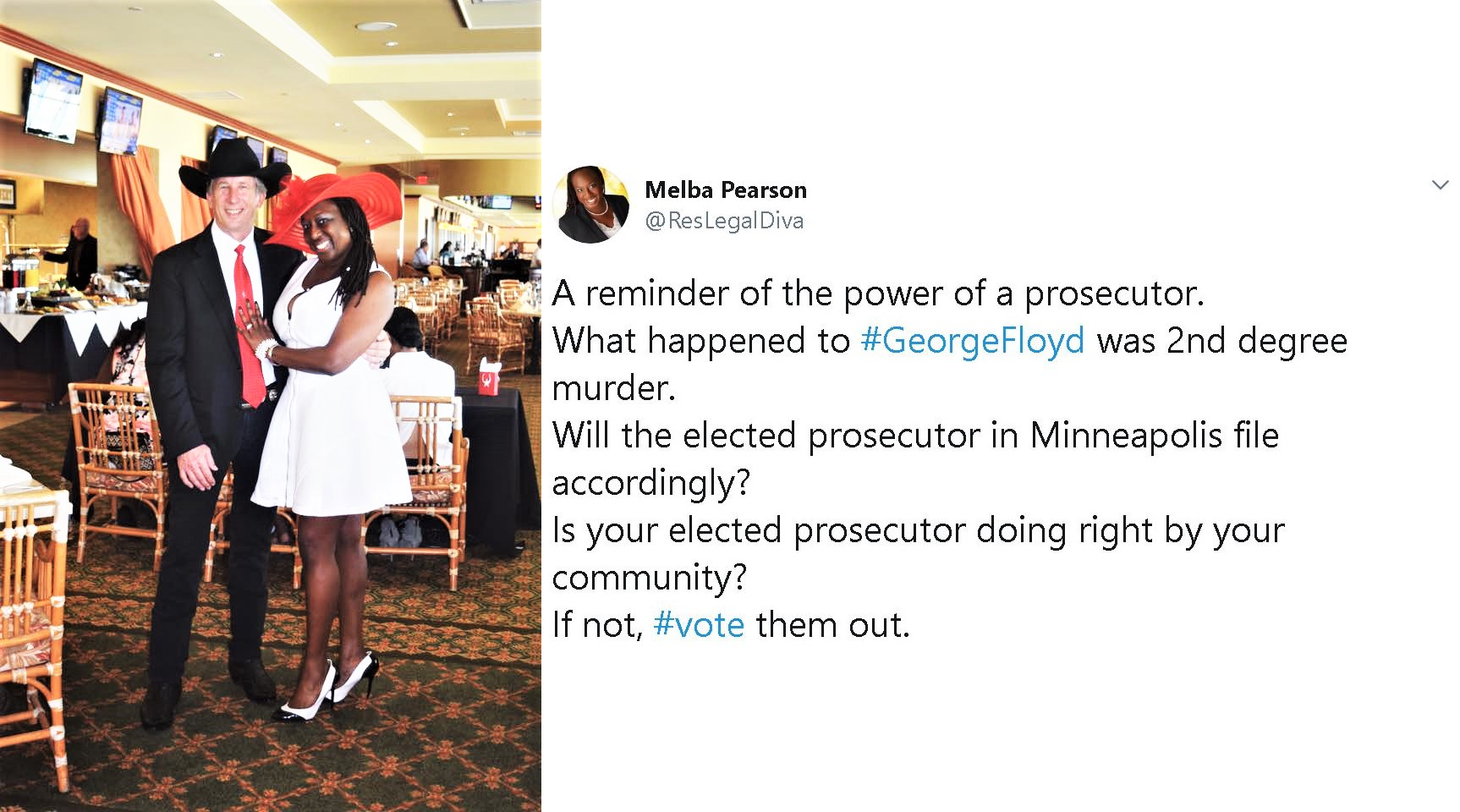 Pearson is a rare candidate for a prosecutor. She openly states she wants to end cash bail, hold police accountable, and spend her time in office reforming the justice system, which is something critics accuse her opponent of never doing in 26 years.

Fernandez Rundle’s office has never prosecuted a police officer for even a single on-duty death in 26 years, according to the Miami New Times, which called her to record a “disgrace” in a 2017 article.

On Wednesday, Pearson, who worked 16 years as a Miami-Dade prosecutor under Fernandez-Rundle posted to Twitter, stating she believes the death of George Floyd amounts to 2nd-degree murder.

Then she asked a very important question.

One the majority of the public is also asking.

“Will the elected prosecutor in Minneapolis file accordingly?,” she Tweeted, referring to the brutal death of George Floyd who many agree was murdered in cold blood on video.

“Is your elected prosecutor doing right by your community?”

“If not, vote them out,” she urged voters on social media.

That’s something South Floridians were never able to do during the Fernández-Rundle era.

Not even once for 26 years.

Fernández-Rundle’s political career began in 1993 after she was appointed to replaced replace Janet Reno, the former Miami-Dade State Attorney who left for Washington, D.C., to become the acting U.S. attorney general under President Bill Clinton.

Pearson, seemingly her polar opposite, promises to be different than Fernández-Rundle whose legacy consists of not only not prosecuting a single officer, but even clearing Corrections Officer Roland Clarke of any criminal charges for what many say was also murder.

Video evidence showed Clarke locking inmate Darren Rainey, a prisoner at the Dade Correctional Institution (DCI), in a scalding hot jail shower as punishment for defecating in his cell on June 23, 2012.

Fernández-Rundle decided to decline charges, towing the so-called Thin Blue Line instead, despite public pressure as well as forensic and video evidence that told a different tale than the one her office depicted to the public after investigating the incident.

An autopsy leaked to the Miami Herald in 2016 claimed the death was “accidental,” caused by a combination of the confinement in the hot shower, his heart ad lung problems, and his schizophrenia.

Photographic evidence shows Rainey’s skin peeled off of his body, which indicated a reckless act of torture — not an accident or negligence.

Still, Fernández-Rundle cleared officer Clarke of any crime despite the physical evidence pointed more to premeditated murder, which ultimately allowing Clarke to remain on the streets to cause problems for another department.

In 2014, Clarke resigned from the Florida Department of Corrections after an investigation and news report by the Miami Herald before he was immediately hired as a patrol officer by the Miami Gardens Police Department shortly after his resignation.

Subsequent investigations by the Miami Gardens internal affairs office also discovered several conduct issues with Clarke, including an incident in which he ran a red light in his police truck before crashing into another vehicle.

In 2016, Clarke was also reprimanded by the department after he called a tow truck to remove a car that belonged to a drowning victim without first securing a cell phone and a wallet.

Those items disappeared before homicide detectives could get to the car to document and investigate, which left many with questions about what happened to the victim.

In yet a separate issue in September 2016, a complaint was filed against Clarke alleging the troubled officer was “pursuing personal relationships while he was supposed to be on the clock at work.”

Even after a married patrolman received a five-day suspension and a warning for his conduct, another investigation determined Clarke abandoned his patrol area several times in 2017 leaving his duties behind to meet with his mistress when he decided to pursue yet another extramarital affair while simultaneously collecting his tax-payer funded paycheck.

Despite it all, in March 2017, Fernández-Rundle announced publicly she was declining to file any criminal charges against Clarke in connection with Rainey’s death stating she found the testimony of witnesses, including the testimony of former DCI inmate Harold Hempstead who tipped off the Herald about how Rainey was scalded to death as punishment, to be unreliable.

Fernández-Rundle’s office eventually closed its investigation into the brutal killing of Darren Rainey even after viewing video footage that showed Clarke leading Rainey past other showers and into the one where he was killed.

“It’s the only shower in the blind spot,” Hempstead recalled in an interview with CBS Miami.

Other inmates said that shower was specifically rigged so guards could adjust the temperature outside the locked shower as punishment.

So how is Melba Pearson different?

She was, after all, a prosecutor for 16 years and somehow lived with herself taking orders from and working under Fernández-Rundle’s leadership.

But Pearson also served as the deputy director of the ACLU of Florida after working as a prosecutor under Fernández-Rundle.

‘Months before entering the race to become the top prosecutor, rumors circulated among South Florida’s legal community that Pearson would attempt to capitalize on nationwide calls for justice reform to make a run at ousting Fernández-Rundle — Pearson’s former boss.

Her entry into the race wasn’t exactly a bombshell revelation.

Pearson, 46, officially began her campaign, less than two weeks after Democratic political consultant Benjamin Pollara formed a political committee dubbed Real Reform for Miami-Dade in December 2019 to back a challenger to oust Fernandez Rundle, who has been re-elected six times since 1993.

She promises a fresh approach to criminal-justice reform as part of her campaign platform.

“I will bring bail reform, juvenile-justice reforms and other types of reforms that will keep our community safe and save taxpayers money in the long run,” she told voters during a January 15 press conference, announcing her candidacy.

“My parents both immigrants of this country instilled in me Dr. King’s message of justice, fairness, and equality. They made sure that I knew, as Dr. King said, that none of these things are inevitable,” she said in a press conference video announcing her campaign to unseat Fernandez Rundle.

During her announcement to run for office in January, Pearson accused Katherine Fernandez-Rundle of being “stuck” in the 1980s and 90s pursuing “Reagan-era policies and prosecutorial priorities that don’t work.”

Recently, she’s been busy publicly contrasting her perspective and value for human life with Fernández Rundle’s.

“It’s just disgusting that we are still in the same place, we’re still begging for recognition, begging for our humanity to be recognized, begging for change,” she told WPTV in an interview discussing the brutal killing of George Floyd.

But it’s her experience and videos like the one showing George Floyd’s brutal murder that catalyzed the decision to make yet another drastic career change, shifting from the deputy director at ACLU of Florida to now running to be elected as the state attorney in Miami-Dade County.

“For decades for centuries people of color were saying I can’t breathe my rights are being violated and in recent history, it became this well you guys play the race card too much, you complain too much, but when you have white allies, people who believe in justice raise the same messages, now it ends up being received differently, it’s unfortunate, but that’s where we are,” Pearson explained.

While Pearson and Fernández-Rundle are both Democrats there are glaring differences between the two.

One thing can be sure.

And she’s willing to take a stand against the injustices that have gone on far too long against people like George Floyd or Darren Rainey.

Given that alone, she ought to win the election for Miami-Dade State Attorney’s office in a landslide.

The question is will she?

So far, the only arrests made in relation to George Floyd were made by Minnesota State Police who arrested a black reporter for CNN named Omar Jimenez who was arrested in the middle of reporting live on television early Friday morning.

Jiminez was covering the Minneapolis protests when officers led him along with three crew members away in handcuffs, in what now being called another incident involving racism by police.

That video, along with Pearson talking about her stance during her announcement to run, can be seen below.