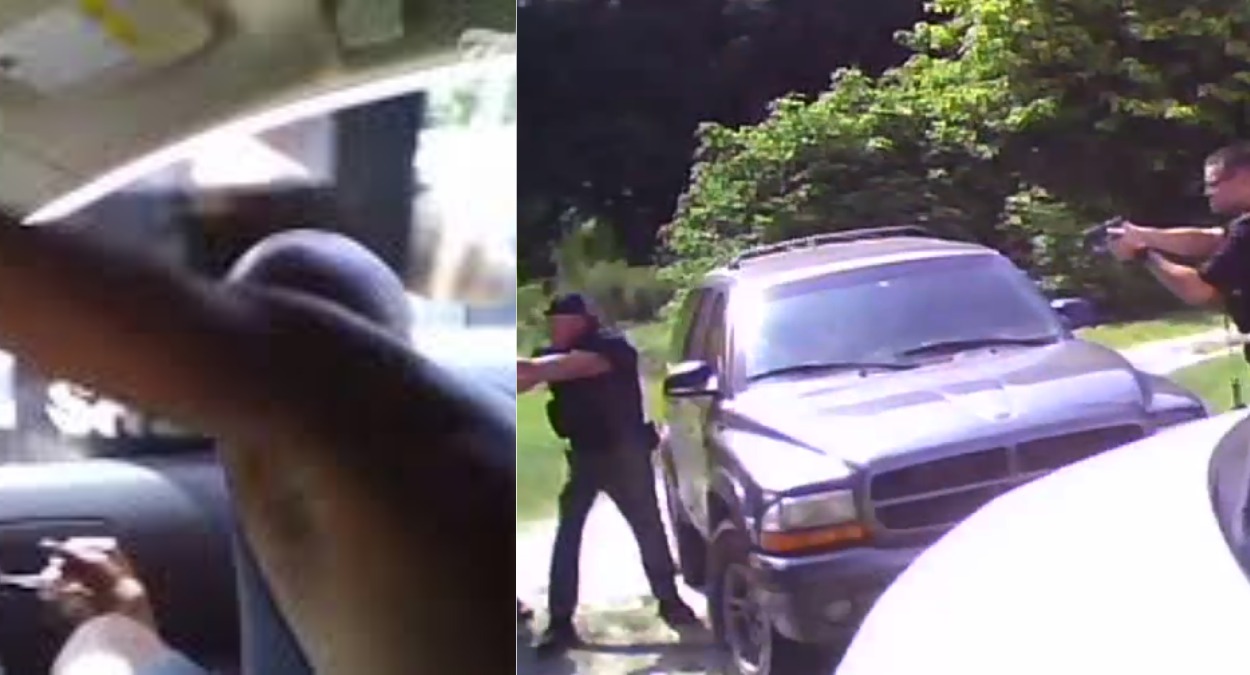 For six years, the Pasco County Sheriff’s Office stuck to their story: that the shooting of 41-year-old Jerry Dwight Brown, an unarmed black man, was justified because he repeatedly ignored their order to raise his hands and surrender.

But a newly leaked video contradicts their claim.

At the time, deputies gave statements to investigators saying Brown was reaching for something before they opened fire.

Instead, it shows deputies opened fire on Brown within seconds without any provocation.

The video, obtained by the Tampa Bay Times, shows a small-scale drug bust turning deadly within an instant.

Eleven seconds to be exact.

The footage shows an undercover deputy coaxing Brown into the officer’s car as other deputies surround it to arrest him.

One struck him in the back.

The video, recorded from the driver’s seat directly next to Brown, shows deputies did not even give him time to surrender.

In all, it takes only 11-seconds between the time deputies to approach the car and the final shot fired.

The Pasco County Sheriff’s Office has repeatedly declined to release the portion of the video that shows the actual shooting.

When this video was recorded in 2014, it was exempt from being released.

Today, such videos are considered public records according to Florida law.

When Tampa Bay Times reporters told the sheriff’s office they obtained the video independently and intended to publish it, an attorney for the office, Linsday Moore, claimed: “video portions depicting the death of Mr. Brown are clearly confidential and exempt from public disclosure.”

Moore said anyone publishing the video would be “in violation of the law.”

But the Tampa Bay Times published the video showing the moment shots were fired at Brown, killing him.

The incident occurred in Pasco County on July 1, 2014, just weeks before Eric Garner was murdered in New York.

The death of Brown sparked protests, with more than 100 people in Zephryhills, but drew little attention after that.

The sheriff’s office settled with Brown’s widow, Tresa Brown, for $262,500 in February.

But they did not admit any liability in the case.

Amanda Hunter, a spokeswoman for the sheriff’s office, said her office settled “out of respect for Mr. Brown’s family.”

In 2014, Hunter stated the State Attorney’s Office determined the use of force was justified and that an internal review by the sheriff’s office cleared the officers involved in the shooting.

Hunter declined to allow the Tampa Bay Times to speak with either of the deputies who shot Brown.

Both deputies are still employed by the Pasco County Sheriff’s Office.

Jerry Brown was working at his stepfather’s tire shop in Zephyrhills on the day of the shooting.

He had allegedly sold pills a few times to undercover deputies in the weeks before his death, according to records.

Deputies had planned to make a final drug purchase from Brown and then arrest him.

Video, from a camera hidden in the undercover deputy’s sunglasses, show the deputy driving up to Big Ben’s New and Used Tires, persuading a reluctant Brown to get inside of the undercover car.

Brown sat in the passenger seat and showed the deputy what they claim was Hydromorphone pills he pulled from his right picket.

When the undercover deputy began counting out more than $2,000, a van full of officers approach the car.

Brown did not appear to notice.

Undercover deputies surround the car, yelling orders that are difficult to understand in the video.

Within a couple of seconds, Brown attempts to exit the car, slightly opening the door.

An officer immediately pushes it closed.

Deputies claim they saw Brown reach towards his right pocket.

What he’s actually doing is unclear in the video.

The bullet from Cabbage’s gun hit Brown in the abdomen before he fired two more shots.

One struck Brown in the buttocks, according to investigative reports.

Another deputy opens the car door so Brown can be pulled from the car.

A detective, identified as Daniel Green, can be heard yelling at Brown to put his hands up.

Immediately, another shot is fired.

A bullet from Green’s gun struck Brown in the back, according to a medical examiner’s report.

Brown was declared dead at a hospital.

After the shooting, Pasco Sheriff Chris Nocco said Brown’s actions made deputies fear for their lives.

“When they said ‘Show me your hands,’ the suspect should’ve shown us his hands,” Nocco told reports.

However, the office also “strongly” urged deputies to “review the video of this event to conduct further operations of this type in such a manner as to minimize the risk of the need to utilize deadly force.”

An outside policing expert reviewed the footage at the request of the Tampa Bay Times and said he didn’t see any justification for the shooting.

Walter Signorelli, an associate professor at John Jay College of Criminal Justice, said the deputies could have taken cover and given Brown clearer instructions.

“It happened so fast,” Signorelli said.

“The ‘takedown’ did not happen as planned, and Brown was dead or dying about 10 seconds after it started,” Jung wrote in an order.

Jung said Brown appeared to be “shocked” by the yelling and thumping and presence of several officers.

“Deputies have maintained that consistent, clear commands were given to Brown, who defied them,” Jung wrote.

“This is not accurate. The commands were almost entirely indecipherable. Green’s command before Green shot was audible, but left no time for compliance.”

Judge Jung referred to Brown as a “small-time pill dealer, with no violent tendencies shown in any recent period” and questioned whether Brown could even be considered a threat after the first shot, calling the second and third shots that wounded Brown “problematic.”

Jung wrote Brown was convicted of a kidnapping and armed robbery about 17 years before the shooting.

But deputies were wrongly informed that Brown had two or three more armed robbery arrests.

Jung rejected a motion filed by the defendants to dismiss the case.

An appeals court upheld his order, noting “Brown was given no time to comply before Green shot him.”

Both Cabbage and Green had been involved in prior shootings, according to news reports.

Cabbage shot and killed a man who allegedly opened fire on a SWAT team in 2009, striking Cabbage in his bullet-resistant vest.

And Green shot and wounded an unarmed woman in 2009.

In that case, the sheriff’s office said the woman lunged towards a deputy, and deputies thought she might have been armed.

Green was also one of five deputies who shot at a man who fired at deputies in 2013.

The man was killed, according to news reports.

Read the lawsuit filed by Brown’s widow below.