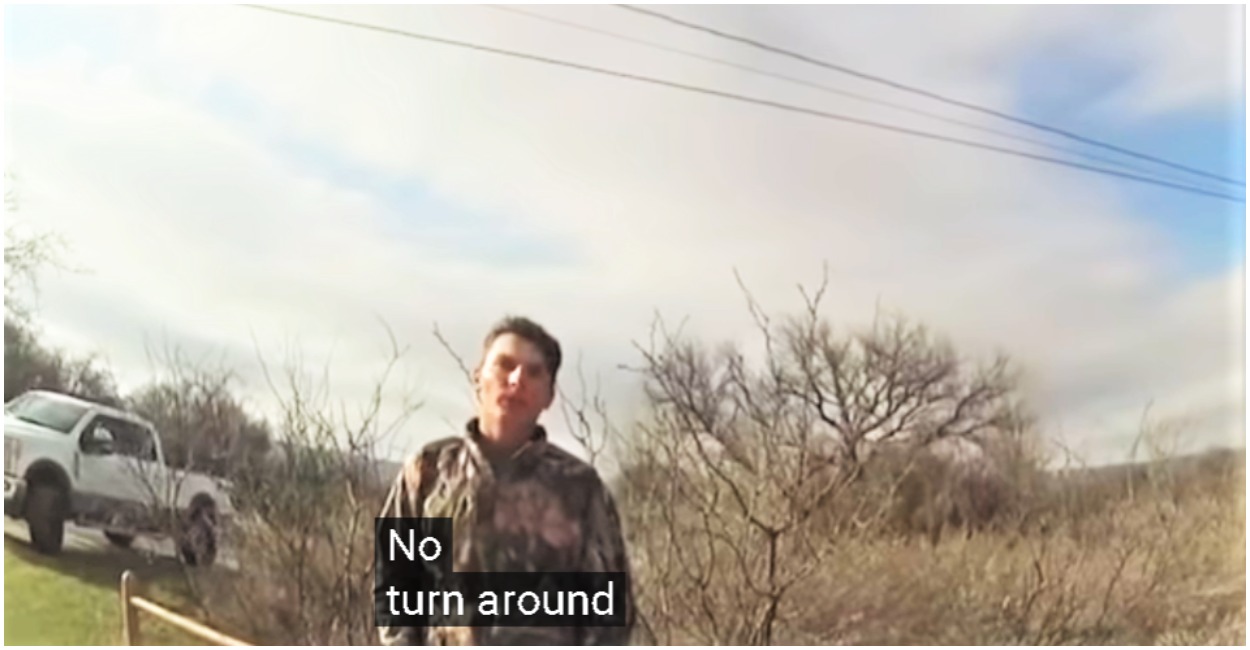 National Park Ranger Robert Mithcell stopped Charles “Gage” Lorentz, who was traveling from Texas to meet his family in Coloroado, for speeding on a dirt road near an area of the park called Rattlesnake Springs on March 21, 2020.

Lorentz took a detour at Carlsbad Caverns National Park in New Mexico to catch up with a friend.

And that would end up costing him his life.

Bodycam video shows Mitchell ordering Lorentz to spread his feet and move closer to a nearby railing.

Mitchell orders Lorentz to turn around.

Lorentz doesn’t turn around and dances to music playing from a vehicle nearby instead.

Mitchell then tells Lorenth to take his hands out of his pockets.

That’s when, without any warning, Ranger Mitchell shoots Lorentz with his taser.

At this point, the video mysteriously goes black before resuming 26-seconds later showing Mitchell on top of Lorentz — after shooting him twice.

The first shot was not fatal, an autopsy report concluded, according to KOB4.

The second shot struck Lorentz in the heart.

Later, Ranger Mitchell is heard explaining what happened in the video during the missing 26-seconds to another deputy who had arrived on-scene from Eddy County.

“That’s when I shot him with a Taser.  It did nothing.  I went dry stun, he hit me somewhere right here on the side of my head.  The fight was on, he grabbed me around the neck, he tried to push my head into the push bar and I came up and fired one round.  I don’t know if I got him or not, but I definitely got him on the second one and he crumbled.”

Although barbs from Mitchell’s taser did not have an effect, as Mitchell can be heard explaining, there did not appear to be a reason to taser Lorentz at that point.

Mitchell then escalates the situation, as he described, by stepping toward Lorentz in order to get closer to him to stun him by using the taser’s function that requires the weapon to make contact with someone’s skin to be effective.

Eight minutes after the shooting, Michell finally retrieves his first aid kid from his vehicle.

Charles Gage’s death was investigated by the Eddy County Sheriff’s Department. Its findings were turned over to Dianna Luce, 5th Judicial District Attorney, who says she is concerned about the missing 26-seconds from Michell’s body cam videos.

Luce says she does not want tow rule if Ranger Mithcell’s shooting was justified or not until she has all of the evidence and materials, which includes the missing portion of the video.

“We’ve now been informed that perhaps that there was a miscommunication or there is some additional material that they can now recover,” Luce said.  “

“We think that is really important to know that we have everything that was recorded.”

Through an email, the National Park Service and Luce both confirmed the U.S. Attorney’s Office is also investigating to determine if Lorentz’s Constitutional rights were violated when Ranger Mitchell killed him.

Police reports confirm Lorentz was unarmed when he was killed.

And no drugs were found in his system, an autopsy report concluded.

Shannon Kennedy, an Albuquerque attorney plans on filing a civil rights lawsuit against the United States Interior Department and the National Park Service on behalf of Lorentz’s family.

“Let’s start with the fact that this man takes a Taser and shoots Gage with no provocation from Gage whatsoever,” Kennedy said.

“There is no communication, there is no de-escalation.  That park ranger is insane.  He’s out of his mind.  What is he arresting him for? Driving too fast down a country road?  And he takes his life over that? It’s a citation.  It’s a warning.  It’s not a death sentence.”

During the days after Lorentz’s death, his mother called around trying to piece together what happened to her son.

But nobody would reveal the name of the park ranger who killed Charles Lorentz.

“Not having any answers has been difficult on my family,” she explained.

“The world is a far less better place without him in it,” Travis Lorentz, Charles’ father said .

Ranger Mitchell was recently assigned to an administrative assignment pending an internal investigation, according to a spokesperson with the National Parks Service.

Meanwhile, the family of Charles “Gage” Lorentz continues pushing for answers and seeking justice for their son.

True Homestead will be submitting a request for the original shooting video and will publish if and when we receive it.