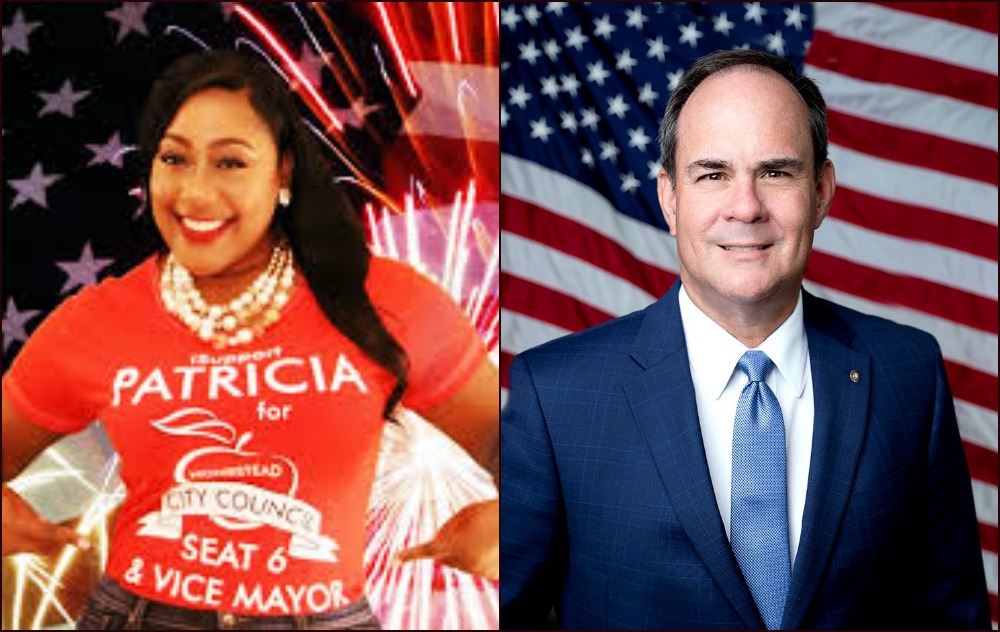 A Florida vice mayor sought a restraining order against the mayor days after making a police report. She insists it was only because she was concerned for her safety.

Homestead Vice Mayor Patricia Fairclough-Staggers says she wasn’t trying to make a public spectacle out of filing a restraining order against Homestead Mayor Steve Losner, but she did have to let it go for her health.

“I needed to let this go for my health,” she explained to the Miami Herald.

It happened in December after the Homestead City Council adjourned its monthly meeting.

That’s when Mayor Losner reportedly stood up and turned to Vice Mayor Patricia Fairclough-Staggers, who was sitting to his left on the dais, saying something that visibly upset her.

Later that night, Fairclough-Staggers filed a report with police saying she felt threatened and scared by whatever Losner said and his behavior towards her.

“Totally inaccurate, blown way out of proportion, and I’ll even use the word ‘false’ when it comes to her characterization and statements as to what happened.”

“I am really shocked at the level the opposition is willing to take it to in Homestead,” Losner said in an interview, chalking up Fairclough-Staggers’ reaction with the restraining order as a political ploy to try to get him out of office.

The incident in question lasted less than 30 seconds, according to Losner.

It ended when the vice mayor “threw her hands up in the air, saying ‘I just can’t take this,’ and stomped out of the room,” he says.

Fairclough-Staggers insists the issue involved what she perceived as a threat.

“The only reason I did the police report is because I was concerned for my safety, and I wanted a record if something was to occur as a result of it,” she said last week.

“As long as I’ve been on the dais, I’ve never experienced anything like that. I know what happened, and I stand on the truth.”

In Fairclough-Staggers written statement to police, she states Losner made several comments that she perceived as threatening, such as: “Stop playing the victim, bitch”;” You watch, I’m coming after you”; and “How dare you to disrespect me?”

“I walked away fearful and afraid of what Mayor Losner’s intentions as it related to ‘retaliation’ are,” Fairclough-Staggers, who was more than six months pregnant at the time.

“As a pregnant female, the . . . intimidating encounter has caused stress on my unborn child and me.”

The exchange between Losner and Fairclough-Staggers took place just after the council declined to confirm a candidate Losner preferred to fill an empty seat, vacated when Elvis Maldonado resigned to run for the County Commission.

During the December 18 meeting, Fairclough-Staggers said the mayor’s choice, Bradley Compton, doesn’t reflect the diversity of Homestead. She argued against Losner, saying the other applicants, “stand head and shoulders above your [proposed] appointee.”

Sean Fletcher, another Homestead council member, vocally supported Compton. But a motion to appoint him failed due to lack of a second.

The mayor has 60 days to secure council approval for his or her preferred nominee, under the city charter.

Because that did not happen, the Homestead city council will vote on five applicants, including Compton, during its February 19 meeting.

So, whoever wins the vote fills the seat until 2021.

A few days after making a report with the police, Fairclough-Staggers took things a step further: she submitted a petition for a restraining order against Mayor Losner in the Miami-Dade Circuit Court.

When Fairclough-Staggers failed to appear for the scheduled hearing about the restraining order on January 15, the case was dismissed, according to court records.

Fairclough-Staggers said in an interview with the Herald that she decided to discontinue her efforts to obtain a restraining order because of recent health concerns like anxiety and high blood pressure during her pregnancy.

Losner ascribes Vice Mayor Fairclough-Staggers’ actions to pursue a restraining order as cynical motives, which were nothing short of an attempted “coup” to remove Losner, who was elected to a two-year term as mayor in November, from office.

“I think there is a bigger agenda at play here,” Losner explained.

“If a restraining order had been issued, how would we both attend council meetings?”

Fairclough-Staggers said her relationship with Losner had been cordial in the past and that the December incident was her first uncomfortable interaction with Losner.

Fairclough-Staggers supported Jeff Porter, a former mayor who resigned during 2018 to run for Florida agricultural commissioner, in the mayoral election that Losner won this November.

Fairclough-Staggers, according to Losner, is the most vocal of the council members and is trying to stack power in the council against him.

The question of who will win the seventh and final seat on Homestead’s city council could be crucial in solidifying political opposition against him.

But Councilman Stephen Shelley, who also opposed Losner’s nomination for the vacant seat, says he doesn’t see anyone trying to consolidate power or form any coalition against the newly elected mayor.

“I think as a body, we’re still adjusting to the new members on the council,” Shelley said, referring to Losner and Fletcher, the lone council member who supported Losner’s nomination of Compton.

“It’s something that we’re going to have to work through and adapt.”

Both Losner and Fairclough-Staggers say nobody else heard the December 18 exchange between them.

Losner states there’s no audio record of the incident, and that requests to release surveillance footage from the council chambers and the lobby were orally denied by the city attorney.

The City of Homestead rejected the Herald’s request for surveillance video last week, citing a Florida public records law for information that “reveals a security system.”