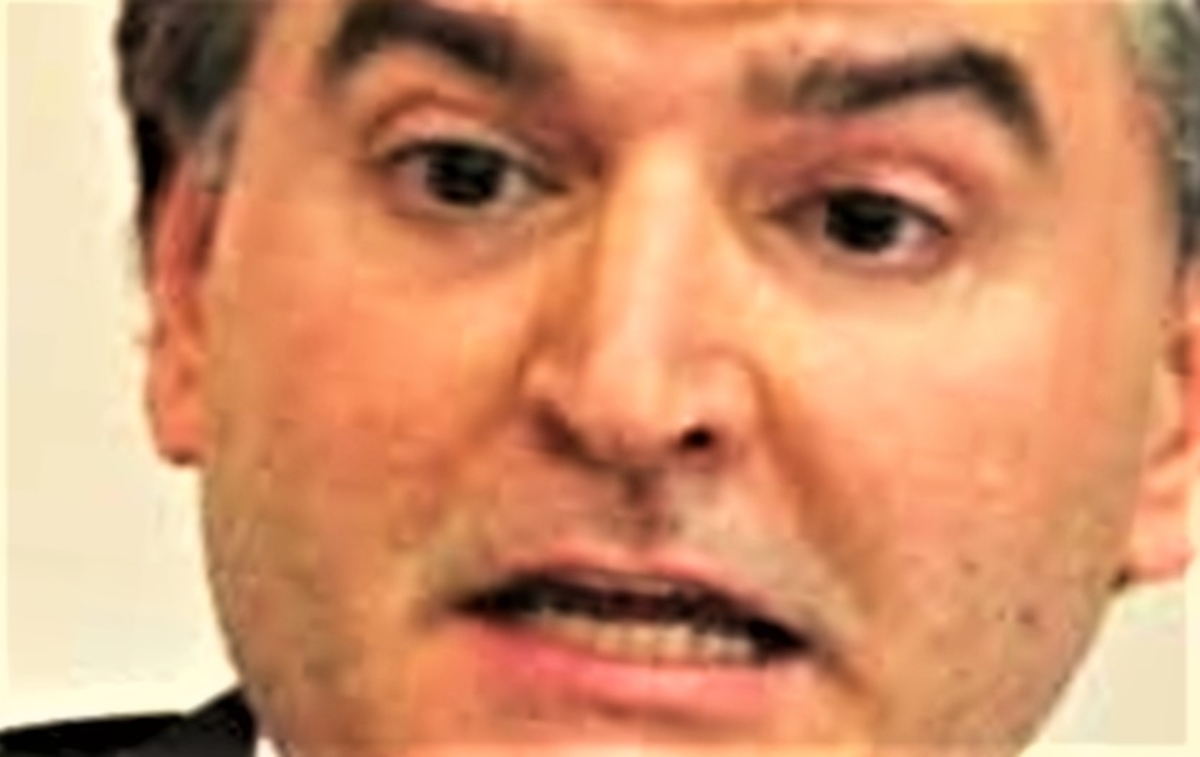 A city manager in Florida is threatening to sue independent media for defaming his reputation.

Delray Beach City Manger George Gretsas took to Facebook on Thursday, threatening to sue True Homestead and myself after we published an article Wednesday that included records showing he may have been involved in a felony bid-rigging scheme called “split bidding” while serving as Homestead’s city manager in 2015.

True Homestead investigated Gretsas’ involvement after we received records from a confidential source.

On the surface, the records we received indicate Gretsas or his subordinates were likely involved in a felony bid-rigging arrangement during his tenure in Homestead, Florida.

Split-bidding is a fraud scheme where government contracts for goods or services are illegally split into two or more contracts, so the amount of the contracts falls below the limit requiring competitive bidding and/or supervisory review.

Gretsas, who has been criticized in the past by fellow politicians for similar behavior, replied with his personal account in the comments section of True Homestead’s Facebook page — putting us on notice.

BUT HIS THREATS HAVE US CONFUSED.

There’s only one problem: What we’re on notice for remains a mystery.

The purpose of this communication is to put you on notice that you have published defamatory material on your blog. I am hoping that by providing you with the facts that you will address this issue and apologize for making a mistake. If the material remains on your blog, then I can only assume that your publication of false information is intentional and done with malice.”

Gretsas also graduated from law school, so he should be familiar with New York Times Co. v. Sullivan — the landmark freedom of the press case that protects the press and the public’s right to criticize public officials in the conduct of their duties.

In Sullivan, the Supreme Court held that the First Amendment protects newspapers even when they print false statements, as long as the publications did not act with “actual malice.”

Fast forward past the legal reasoning.

Gretsas not only requested we delete the article under the threat of suing us for defamation if we did not, but he also demanded an apology after adamantly defending himself against something in which he claims he had no involvement.

Was Gretsas representing these other officials in a legal capacity with his cease and desist letter, too?

WHO HAD AUTHORITY TO APPROVE THE CONTRACTS?

“In addition, at the time that staff was processing these contracts, they cleared each of them with the City Attorney,” Gretsas explains before pointing out what he feels are inaccuracies in our story.

But Gretsas disavowing any knowledge or participation raises even bigger questions.

According to Gretsas, we just don’t understand the City of Homestead’s procurement code.

“False allegations about bid splitting indicate either a lack of understanding of Homestead’s procurement code or defamation of a public official as competitive bids are not required under Homestead’s code for professional services,” he wrote in his reply.

Based on his replies, it appears Gretsas may be the one struggling with reading comprehension.

“The $25,000 City Manager cap provision that you recklessly cite in your post applies to each specific project, not per vendor as you falsely assert,” Gretsas replied on Facebook.

But we never claimed that the provision applies per vendor.

Indeed, the word vendor was never used in the article.

We did, however, show that the same vendor was given four separate contracts “not to exceed” the $25,000 threshold that would require council review even if professional services are exempt from bidding.

We also provided a fifth contract conveniently given to the same vendor just two months before Delray Beach began looking at Gretsas to fill their manager’s position.

This last contract, in 2019, is what really raised flags about a possible quid pro quo or pay-to-play scenario.

We wonder, why the first four contracts to the same vendor were split up into four separate agreements?

In any case, Gretsas claims he had nothing to do with it. Therefore, most of Gretsas’ claims as to what are facts are not based on his personal knowledge, unless he lied.

If Gretsas was not involved, then more importantly what authority allowed others to enter into these contracts?

WAS THERE A CONSPIRACY TO DEFRAUD THE CITY?

If Gretsas planned it this way, his response makes perfect sense.

However, if Gretsas’ underlings went rogue why is he defending their actions?

One minor factual inaccuracy that Gretsas demanded we correct lest we be sued pertained to his relationship with Homestead’s current city manager Catherine McCaffrey.

“Additionally, your statement that I ‘have a business’ with Homestead’s current City Manager is false. I do not have a business with her,” Gretas wrote.

Initially, we published that Gretsas currently has business with McCaffrey, which was an honest mistake because enterprisesflorida.com shows CADAGE LLC. is still active.

Another source confirmed that while Gretsas and McCaffrey had a business together for six years and two months, it is currently inactive.

But they did indeed have a business together.

And Gretsas conveniently never mentioned previously having a business with McCaffrey in his reply in which he denied currently having business with her, implying our mistake was defamatory.

Why is Gretsas now trying to distance himself from McCaffrey in this way?

We are curious as to what that business actually did, but that is for another investigation.

Regardless, it sure sounds like someone is about to get thrown under the True Homestead Truth Bus.

Gretsas responded directly on True Homestead’s Facebook page, where Doc responded with some choice words aimed at the manager.

On Janury 30, 2019, Doc forwarded that email to the Mayor and council for both Homestead and Delray, asking on which city’s behalf was Gretsas acting when retaliating with such threats.

Neither City has responded.

To be fair, in the email Gretsas provided exhibits, though they were not provided with his comments to our Facebook page.

However, nothing in the exhibits “proves” the allegations Gretsas made, nor was anything provided which we have not already published.

Indeed, the records he provided are exactly what make us believe that crimes were likely committed, and his email only further cements that belief.

On January 26, 2019, Doc filed a request for public records with Homestead.

Not surprisingly, no records have yet been provided.

We published the article on January 29, 2019, and Gretsas responded with his threatening email the same day.

But if Gretsas was not involved how would he know these amounts, and have it broken down by year, so fast?

Some discrepancies found reviewing these numbers include:

2) Gretsas specifically refers to and cites work on the temporary police station, and that the work of De Jesus was necessary and instrumental in getting approval for the Temporary Station, but neglects mention of the other three buildings giving the impression that maybe all the money was necessary for this one building and/ or that more than $25,000.00 was spent on one building; and

3) Gretsas failed to provide any records to support: the amount actually spent (how would Gretsas know all of this as he wasn’t involved); that he has no relationship with De Jesus (so he claims); and why Homestead still has provided True Homestead no records but he knows all of this (the City Clerk claims to process records request in the order in which they were submitted).

It seem Gretsas may have opened several cans of worms with his ill-tempered threats.

THE MAYOR GETS INVOLVED.

Homestead’s new Mayor, Steve Losner, posted to Facebook on February 1, stating he made inquiries to both the newly appointed city manager, Cate McCaffrey, as well as the city attorneys.

McCaffrey gave an incomplete response, according to Losner.

Whereas, the city attorneys provided the Mayor with no response.

ARE THE CITY ATTORNEYS INVOLVED TOO?

Homestead uses the law firm Weiss, Serota, Helfman, Cole and Beirman (WSH) to represent them as the City Attorney.

Further, our sources indicate that it was this same attorney, David Wolpin, who cleared the hiring of Gretsas with Delray Beach.

Was Wolpin involved on both sides of these deals, for the contracts and the manager’s job, in Homestead and Delray?

Was Wolpin the attorney who referred De Jesus to the City, when Gretsas claimed city attorneys referred him?

Is Wolpin the attorney, or one of the attorneys, refusing to give requested information to Mayor Losner?

Is there a connection between any of the contracts in Homestead, and the manager’s job in Delray?

Gretsas’ retaliatory letter, and the actions by others afterwards, raises more questions than it answers.

Gretsas’ attack on the fourth branch, i.e. the media, also demonstrates that he is likely very nervous at what we have uncovered so far.

How deep does this all go?

What other connections will be found?

Stay tuned as we plan to follow this story to its bitter end, and hopefully get answers to some of these valid questions.

Read the full story about Gretsas’ probable involvement in split-bidding below.