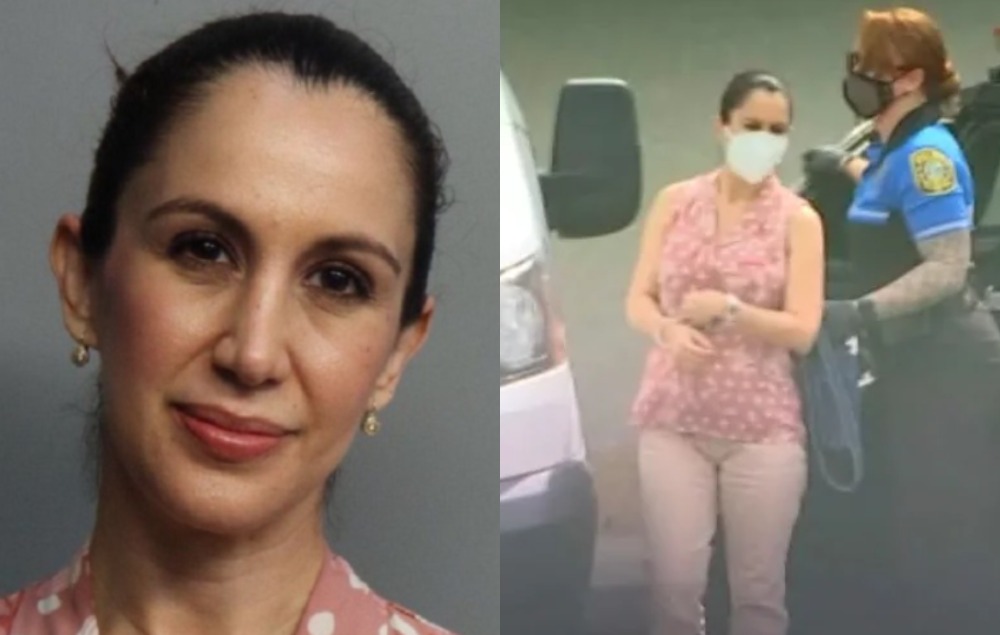 A Florida teacher has been arrested for having sex with her 15-year-old student. She is also eight months pregnant.

Doral Police arrested a teacher at John I. Smith K-8 Center, 41-year-old Hairy Calvi, on Friday for having sex with her 15-year-old student.

And it was all caught on video.

Investigators had been aware of the inappropriate relationship since March 2021 after students reported to school staff that the victim was sharing a video on his phone with other students showing himself and Calvi having sexual intercourse.

They also found photos of Calvi and the victim nude together smoking marijuana.

In total, Calvi is charged with lewd and lascivious battery, offenses against students by authority figures, child neglect, possession of a firearm on school property, and contributing to the delinquency of a child, Miami-Dade jail records showed.

According to detectives, Calvi worked as the victim’s teacher.

After learning of the situation, police obtained permission from the victim’s mother to search through his phone and discovered photos of him naked with Calvi. Detectives said they also recovered text messages between the two expressing their love for one another.

It’s not clear why investigators took so long to arrest Calvi.

“When we spoke to him, he denied being a victim,” Doral police spokesman Rey Valdes told NBC Miami.

“He flat out told us he was not raped. But I want to point out under Florida law [that] a minor cannot give consent.”

On March 7, at around 3 a.m., Doral Police initiated a traffic stop on Calvi, who was driving under the influence, according to her arrest report.

They discovered two other minors inside the vehicle, along with the victim.

The group had been celebrating a birthday party at a banquet hall.

Investigators said none of the children’s parents knew they were with Calvi.

“When I heard from my friends, I was in shock, and I was like, ‘Oh wow,’ and I told my friends, and they were all so shocked,” another student explained.

“We just – it was kind of like a shock, the entire thing. She was very nice, and it’s kind of crazy.”

Parents who later learned about the incident were also shocked.

“It’s mindblowing because you’re expecting the school to let you know that something like that is going on,” said Julio Alfonso.

“You’re not expecting that kind of treatment to your child,” another parent said.

Officials for Miami-Dade Public Schools confirmed that Calvi had not been working at the school since March after the allegations were brought to light.

However, her employment was reassigned to an alternate location.

Calvi is the most recent of numerous Miami-Dade County Public Schools teachers to be arrested for similar crimes, including teachers most recently at Renaissance Middle School and Hialeah Middle School.

Calvi worked with the MDCPS school system for 20 years and had no history of disciplinary actions, according to MDCPS officials.

After conducting the stop, police found a loaded Glock 43 9 mm, loaded with a round in the chamber, inside of her vehicle.

Calvi told police the gun is always in her vehicle and belonged to her husband.

She had been working at the Miami-Dade Schools Northeast Transportation center when she brought the gun onto the property of MDCPS, according to the police report.

NOTHING NEW UNDER SUPERINTENDENT ALBERTO CARVALHO

Last week, a federal jury awarded the victim of an MDCPS high school teacher $6 million for raping her inside of his classroom.

“You took advantage that I was a lost girl,” the victim read in a statement.

After the verdict, Miami-Dade Schools Superintendent Alberto Carvalho posted a photo of himself to Instagram celebrating with CBS Miami journalist Jim Berry.

Critics say Carvalho’s cozy relationships with local journalists and law enforcement officials could be the reason he still has a job as the MDCPS superintendent.

In 2017, a Florida jury awarded $49.3 million to a former high-school student who was raped by her former geometry teacher in his classroom, according to Daily Mail.

Yesterday, True Homestead published an eerily similar story about Brittiny Murray-Lopez, a Hialeah Middle School teacher who was arrested for having sex with her former student who was 14 at the time of the incident.