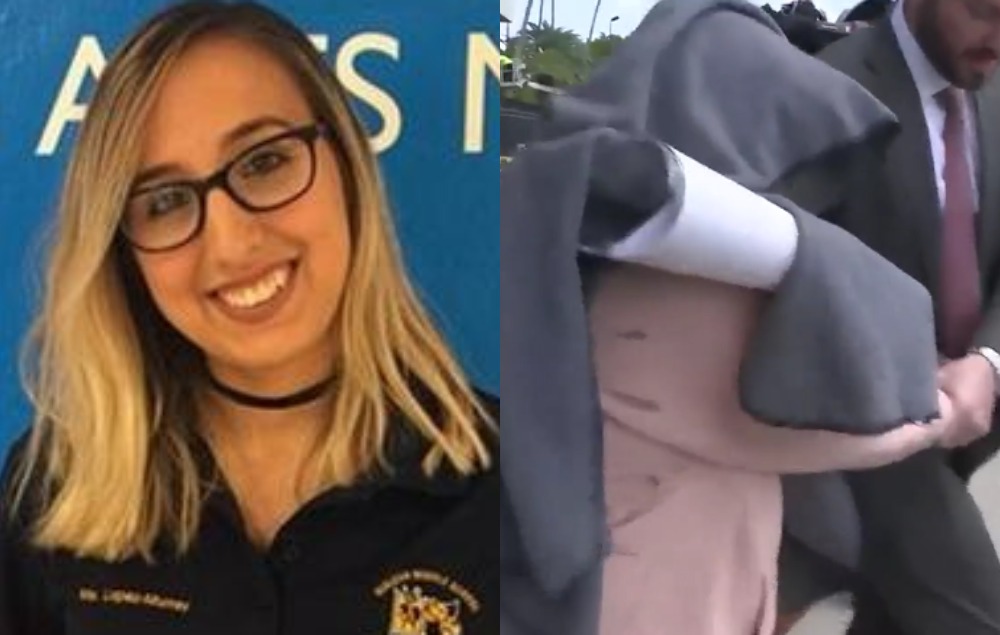 She was arrested this week for sending nude photos and having sex with a 14-year-old student.

Hialeah Middle School drama teacher, 31-year-old Brittany Lopez-Murray, was arrested Monday and charged with molestation, lewd and lascivious battery, and engaging in sex acts with her child student, according to NBC Miami.

Lopez-Murray now faces 16 felony charges, including eight counts of electronic transmission causing harm to minors and six counts of promoting a sexual performance by a child.

She also faces two charges of the unlawful use of a communications device and is charged with the prohibited use of computer services.

She’s also charged with sex crimes against students by authority figures and using her computer services to travel to meet a minor.

Lopez-Murray is yet one more teacher added to a growing list of educators who’ve been arrested for engaging in sex acts with their child students while under the watch of Miami-Dade County Public School System Superintendent Alberto Monteiro Carvalho.

She posted a $77,500 bond before being released from jail on Tuesday.

Her defense attorneys Jeff Chukwuma and Landon Ray said they had not yet viewed the arrest report on Monday night.

“She is presumed innocent until proven guilty,” Ray told the Miami Herald.

“We hope everyone is patient, doesn’t rush to judgment, and respects the family’s privacy.”

Lopez-Murray was named “rookie of the year” teacher in 2017.

School district officials for Miami-Dade said she had no previous disciplinary reports during her four years teaching at the school.

According to her arrest report, Lopez-Murray began her relationship with the teenager in August. The victim now attends high school but was a student in her drama class at Hialeah Middle School.

The victim’s sister became suspicious of his behavior this Saturday. Eventually, she was able to get his phone, where she saw “explicit photos and text messages between Lopez-Murray and the teenage victim.

According to the police report, the boy’s father later saw his phone, which contained nude photos that Lopez-Murray had sent.

The text messages described “how much they enjoyed sex with each other.”

She texted in August to discuss her feelings about him, according to the Herald.

Hialeah police later interviewed the boy. He explained that Lopez-Murray sent him the text message in August, and they later met up for coffee. He told investigators that led to sex acts in her car multiple times, including in the parking lot at a grocery store and a mall.

The school district said in a statement that it was “saddened and disappointed over these serious allegations given that the district takes great measures to ensure our students are educated in safe learning environments.”

“All employees receive training and are expected to abide by the District’s Standards of Ethical Conduct policy. It is unfortunate that despite our efforts, the actions of some individuals run contrary to the behavior that is expected of them,” the statement read.

School officials said Lopez-Murry will be terminated and unable to seek future work with the district due to Monday’s arrest.

A hearing for her arraignment is scheduled for November 3 at 9 a.m.

Just days before Lopez-Murray’s arrest, another Miami-Dade County teacher was arrested and charged with second-degree lewd and lascivious behavior after a 14-year-old student alleged he sexually assaulted her and touched her inappropriately throughout the school year.

Daniel Fernandez, 36, an eighth-grade teacher at Renaissance Charter Middle School in Doral, was arrested after the victim told her father that Fernandez would kiss her on the lips and grope her over her clothes.

He was arrested on Friday after investigators said the student told police that Fernandez was her eighth-grade teacher and had made inappropriate contact with her while she was his student.

The told victim investigators that Fernandez took her into a storage closet and began groping the student under her clothes on one occasion.

Renaissance Charter Middle School released a statement assuring the public that all of their teachers pass a background check before being hired and that “all appropriate actions” would be taken to ensure the safety of their students.

“Our highest priority is the safety and security of our students, and we will not tolerate anyone treating students in a way that makes them feel uncomfortable,” the statement read.

“Because this is currently under investigation, we are not at liberty to discuss details any further.”

However, under the watch of Miami-Dade Superintendent Alberto Carvalho, students seem anything but safe.

According to a source for True Homestead, it’s possible that the sexual relationship between Lopez-Murray began when the child was attending her class at Hialeah Middle School.

Since that victim came forward, at least ten other victims have made similar claims to authorities.

Lopez-Murray, Fernandez, and Meyers’ are just a few of many other teachers who’ve now been charged with sex crimes against students under the watch of Superintendent Carvalho.